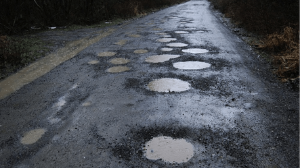 The street where my office resides is a busy two-lane road. For the past several years, it has only contained a handful of businesses. Recently however, it has become a pathway to an expressway, which has increased the amount of traffic…significantly. Additionally, in the last few months, a new apartment complex has begun construction. All of this traffic has caused the already fragile road to become so worn that there are now potholes so large that they could swallow a single tire. The challenge with these potholes is that unless you drive that road daily and know that they are there, you do not see them until you are in them.

Like roadway potholes, many people also experience potholes in their faith. Places where the wear and tear of daily life, lies of the enemy and broken places that have yet to be healed grind down the truth of God’s Word until one day, a hole gives way. It can happen through a financial crisis, a relational conflict, or an unexpected doctor’s report. It can also be the result of too much work, not enough rest, or a dream that doesn’t come to fulfillment or any number of other scenarios.

You see, the thing about potholes is that although they seem to appear suddenly, the reality is that most have been breaking down for years. In fact, the US Federal Highway Administration reports that 70% of unsealed cracks become potholes within 3 years. Little by little, the road cracks and erodes until one day you find that you have lost a hubcap or worse a tire on a familiar road.

This happened to me not long ago. Not with an actual pothole, but rather with a faith pothole. A situation that I had not addressed for too long became a crisis, and when it did, I experienced a faith pothole as well. That hole became as dangerous spiritually as the actual crisis was physically. When it happened, it created a place of vulnerability where I was tempted to try and fix the problem myself or worse throw my hands up and simply give up rather than trusting that the Lord was big enough and cared enough to address it.

Thankfully, I resisted my natural temptations and cried out to God. He then led me to a verse found in Proverbs 3:5-6 which says, “Trust in the Lord with all your heart and lean not on your own understanding; in all your ways submit to him, and he will make your paths straight.”

Even though this is a familiar passage to me, I felt like I saw it through fresh eyes that day. Notice that it says that when we trust God with all of our hearts and do not try to fix things ourselves that He becomes responsible for the paths (roads) in our life. In the same way that we often call the city authorities about a pothole on the street in front of our office, we have the ability to call out to God about the potholes in our faith.

I have to wonder how much better off we would be if we simply did not wait for a pothole to appear and then reacted. Instead, what if we proactively performed maintenance on our lives by asking the creator of the universe to come and inspect the roads of our lives for cracks and vulnerabilities. I wonder how many faith potholes we would avoid if we would allow Him to perform construction, in His way and in His timing. How might life be a smoother ride? It might be something to consider.